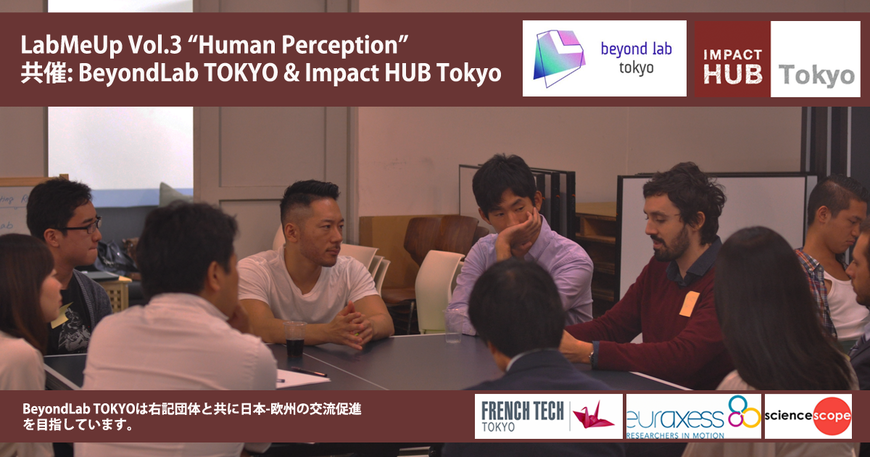 Get invited to future events

¥2,000 at the door
1 drink & snack included for networking party

** Before reading, please pay attention to the following remarks! **
※ For reserving your ticket, please go to another Doorkeeper page managed by Impact HUB Tokyo. The current page is only for notification to the BeyondLab’s community.
※ The event will be held basically in Japanese, but one of the three table-discussion groups will be in English.
※ About the access, please confirm by yourself with the official web site of Impact HUB Tokyo (*a link is available at the end of this page).

A French non-profit association, BeyondLab, has been founded in Grenoble, France, since December 2013. Today, the movement “BeyondLab” is expanding to the world and has launched its first branch in Japan, at Tokyo, since March 2016, having a kickoff at Hongo LabCafe and a pre-event supported by French Tech Tokyo and Softbank (SB Inno Venture Co., Ltd.) Since October 2016, BeyondLab has held his branded workshop "LabMeUp" in collaboration with Impact HUB Tokyo or Panasonic Wonder LAB Osaka. By connecting Science (also academic research) and Entrepreneurship (business & social issue solution), BeyondLab will empower people and create opportunities for science to be used more widely in the world!

About BeyondLab's activities and ideas:
interview of the representative of Tokyo branch
article written by Xavier BLOT, founder & president

About the ambience in the past events:
BeyondLab TOKYO's Facebook Page

BeyondLab is coming back to Impact HUB Tokyo (Meguro) where held the first “LabMeUp”! Impact HUB Tokyo is one of the most active entrepreneur basecamps in the Tokyo area as you may know. This time, the theme of event is given as “Humain Perception”. In recent years, many technologies such as IoT, VR/AR, and Robotics are penetrating into and surrounding our lives. While the quality of experience is largely increasing, we are arriving at the point where we should think again of the possibilities of "human’s ability to catch stimuli coming from his/her living world". Many studies have shown that human perception can exist when there is nerve processing, and that it is a process that cannot be explained with only a mechanical input model. For example, human’s vision is not just taking pictures of the outside world like a camera. In fact, we refer to the past experience and recognize the size and distance of objects. Therefore, we have a question like: Is there any gap between scientific understanding of human perception and present technology? This is the background for the event. We believe that new innovation seeds are there. In the event, we will gather researchers having a vision to rediscover "human perception" and an enthusiasm to create new applications. As usual, we will coordinate exciting and interactive discussions with you.
Let’s join us!

Recently the word "startup" is heard all over the world. In addition to VCs, governments’ initiatives have been also taken up in the media day by day. So, it is now becoming a social phenomenon, also and already, in Japan. The philosophy underlying "start-up" may be "use technology and ideas to successfully innovate, create new value, and solve difficult social issues". Today, there are various categories of "startup", but BeyondLab aims especially for what is called "academic startup". It is said since a decade that only a small amount of the results of academic researches has been returned to our society. Much less than expected. However, many social issues are still emerging and it is strongly required to transfer research-based knowledge and technology to actual situation more quickly. A movement to adopt the attitude of "start-up" to academic research should be accelerated, having a change on the mind set of researchers. For that, BeyondLab provides a place where one meets more interactive communication between researchers and entrepreneurs.

BeyondLab is a non-profit association working on academic startup support, founded in Grenoble, France, by doctoral students and entrepreneurs since October 2013. At present, BeyondLab has an expanding network of “Labs” in the world mainly in France, Spain, and Japan. In the past events held so far, we have met more than 1300 participants and 100 research projects. We aim at creating opportunities to link academic researches with people in order to change society to a better direction. Through activities, we also aim at making young researchers find divers career paths. Our core format "LabMeUp" invites researchers related to a specific theme for each time as presenters, coordinating interactive communication with participants of various backgrounds. For researchers, it is an opportunity to think about how to make use of their research, to turn it into implementation. For other participants, it is a chance to discover new ideas and interests.

Speaker No 1, Mr. Junji WATANABE
NTT Communication Science Laboratories Human Information Research Dept. Senior Researcher (Special Researcher). Associate Professor, Tokyo Institute of Technology Graduate School of Engineering. Doctor for Information Science and Technology. He is studying the perception mechanism of human tactile sense and words expressing sensation. He is developing interface technologies that utilize human perception characteristics and also conducting research on the relationship between human senses and the environment from both theoretical and applied perspectives. In recent years, he performs numerous exhibitions not only in academic activities but also in science museums and art festivals. He has many publications as well. He has been awarded for the work of "intelligence of tactile sense to produce information" (the Daily Publication Culture Awards (Natural Science Division)).
“I think that experiences on communication and emotions are usually given by a product or game. Here, texture is important. However, “HAPTIC” would be not only for that. It will give a reality to our society.”
From the new vision of "HAPTIC DESIGN", not confined to only the conventional material viewpoint, we will be able to discuss self-sense of enthusiasm, physicality of information, etc. Why do not you explore together ?

Speaker No 2, Mr. Yuki HARADA
Around the time of junior high school, some smell extraction experiments in class gave him a great curiosity in "smell". Today, he is a researcher who loves fragrance even in everyday life as a coffee mania and a perfume enthusiast. Graduated from Kyushu University, the Department of Molecular Science, then obtained master degree at its Graduate School of Science. Also engaged in research and development at companies, he finally desired to come back to an academic world for studying more about “smell” by Science. In 2016, He has obtained a Ph.D. degree at the Tokyo Institute of Technology, the Department of Science and Engineering, for the work about informatization of smells ("multidimensional of smell sensing space Research on elemental smell search method by data analysis "Supervisor, Nakamoto Takamichi). He was also working on fragrance product analysis, development of original fragrance, and application of odor-VR. After that he moved to Tohoku University, Medical Megabanks Organization, and is currently working.
His interest is to explore applications and services to be enabled by his “informationalization of smells”. When concentrated, relaxed, and … human is always surrounded by some smells! If you can handle fragrance as "information", what is happening next?

Speaker No 3, Ms. Ana SAN GABRIEL
Until June 30 2010, she was a senior researcher of the Physiology & Nutrition Group at the Institute of Life Science of Ajinomoto Co, Inc., Kawasaki, where she worked as a researcher since 1997. During this period, she investigated about the expression and function of amino acid receptors in the stomach. From July 1, 2010 she became manager at the Public Communications Department. A graduate of the Veterinary School of La Universidad Autonoma de Barcelona, she received a Masters in Nutrition from the Pennsylvania State University with a scholarship of the Ministry of Agriculture of Spain. With another scholarship from the European Union, she conducted a research project at The Veterinary School of The University of Tokyo before entering Ajinomoto. Since April 1st 2016, she has become a member of the newly created Global Communications Department as a science communicator about umami in Japanese cuisine (washoku), a well-balanced taste that can be used to reduce sodium and fat intake promoting good nutrition and health.
Dr. San Gabriel’s research interests include the study of the umami taste, and the taste of other non-protein amino acids, the molecular mechanisms involved in their sensing, and their multiple functions of umami substances in food and the gastrointestinal tract (gut chemical sensing).
She is also a founding member of the Association of Spanish Scientist in Japan (ACE Japon) and Scientific Affairs Representativeof the Non-profit organization Umami Information Center. She has been invited as speaker to many international scientific conferences and special lectures about chemical senses in the mouth and gastrointestinal tract.

4. Timetable of the day (planned)

** Toshi TABATA (representative of BeyondLab TOKYO, moderator and facilitator) **
Graduated from Kyoto University, the Department of Physical Engineering. Obtained a master and Ph.D. degree at The University of Tokyo, Graduate School of Engineering. He moved to France as a postdoctoral fellow and worked as a member of the French Nuclear and Alternative Energy Institute (Commissariat à l'énergie atomique et auxégégies alternatives, CEA) He worked for Laboratoire d'électronique des technologies de l'information, Leti. He met the founders of BeyondLab in the same lab. His fields are Materials Science and Semiconductor Engineering. In France, he learned French and was qualified in 1 year and a half for Level B2 by French Ministry of National Education (DELF B2, a test for 4 linguistic skills). Afterwards, he finished his postdoc then moved to a French company as an engineer-researcher. In BeyondLab, he is now trying to accelarate communication between academic world and society in Japan. Since March 2016, he is in charge of the representative of BeyondLab TOKYO. He is also aiming at building a bridge between Japan and France/Europe.

What is BeyondLab ? BeyondLab is a non-profit association launched by French young researchers and entrepreneurs since Dec 2013. We facilitate Science & Technology based applications and tackle...